Home Dog Blog No One Had Time’ For Senior Collie Left At Shelter Except For... 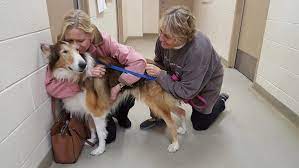 “After 16 years of being a loyal companion, guardian of children, confidant and protector he was discarded.” His reaction when he knows he’s being saved is the best.

Animal shelters see all kinds of dogs, with all kinds of stories as to why they end up there. Usually, though, their stories are heartbreaking ones. Like Jake’s. Jake arrived at Ohio’s Humane Society Serving Crawford County, a senior dog, whose family decided they no longer wanted him.

“Yesterday a beautiful 16 year old Collie came to us. He was surrendered because no one had time for him. After 16 years of being a loyal companion, guardian of children, confidant and protector he was discarded,” the Humane Society wrote on Facebook. “We gave him the quietest kennel we could find as he looked around in fear and confusion. He didn’t question or fight… he followed me with trust and dignity and the wisdom that comes with old dogs.”

They settled him in and immediately began calling and emailing their friends at various rescues. Within hours they had a rescue lined up to come and pick him up.

Almost Home Dog Rescue of Ohio agreed to take Jake and the two volunteers who went to pick him up cried when they saw his precious old face and beautiful soul.

“We all hugged knowing this would be one of the lucky ones. This beautiful dog will have the best possible final years,” wrote Crawford Humane.

Once Jake was safe, the Humane Society took the opportunity to explain some of their thoughts and feelings on the irresponsible owners that surrender their dogs to the shelter and the toll it can take on rescuers.

“The lies that are told, the excuses we hear, the sad old dogs that have given of themselves, the best they have to give, only to be handed over to strangers when they need peace and safety in their final years, all take a toll on those of us who pour our hearts into our job. There isn’t one of us here who hasn’t cried over ones lost. We are accused daily of being cruel and heartless because we are forced to make hard decisions due to the irresponsibility of people.

“We are stopped in Walmart, at dinner, and at school events to be asked “how long before you put them down?” as if that is the only reason we work at an animal shelter. And when it comes time to make that decision pets are brought here and surrendered because “we just can’t do that to them” and” I thought since you do it all the time it would be easier for you”.

We are told “I could never work THERE I don’t know how you do it”……but we wouldn’t work anywhere else!! We work here because people can be cruel and irresponsible and we want only to help those who haven’t a voice of their own. We work here because we know we make a difference one cute fuzzy face at a time. We work here for the puppy kisses, the soft kitty pats, and the blessing of finding pets a new home where they will live in peace.”

Jake is one of the lucky ones to benefit from the commitment and dedication of rescuers like these.

Almost Home Dog Rescue says that Jake is adjusting nicely in foster care and that “he has taken a liking to the leather couch and lives comfortably in Columbus.” They add, “Jake will be placed in the AHDRO Senior to Senior program so that we can be certain he is well cared for and never ends up homeless again.”

Since originally posting this story, Jake has found a home. But Almost Home Dog Rescue always has loving dogs looking for forever families. You can view their adoption listings on their website.

Share Jake’s story with your friends and the wonderful work these rescues do for senior dogs.