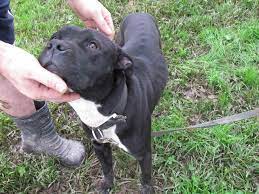 “He was lovingly and faithfully waiting on a family who had thrown him away with the rest of the garbage in their life.” That’s how Donna and her husband came to rescue a neglected Pit Bull abandoned by their neighbors. What followed next is the wonderful rescue story of Dozer and how his new family overcame their fear and prejudice of his breed and welcomed him into their hearts.

This is a touching rescue story of how one family took in a Pit Bull after he was abandoned by their neighbors. Despite being afraid of the breed, Donna Deville LeBlanc brought the dog into her home and what happened next is truly special.

Donna shared her story with DogHeirs and explained how Dozer became a member of her family.

“When our neighbors were evicted, they left behind a pile of broken, cheap furniture and belongings at the curb. Three days after they left, we noticed a starving, frightened black pit bull sitting piteously on one stained mattress.

“He would occasionally get up to sniff at the discarded clothing in the pile or to relieve himself of bloody and loose stools, but for the most part, he just sat on that mattress, a terrified animal whose breed is in itself terrifying. He was lovingly and faithfully waiting on a family who had thrown him away with the rest of the garbage in their life.”

“Some of our other neighbors talked about calling animal control to pick up the animal, who had spent his life shut up in a shed on the now-abandoned property. Knowing that the shelter would destroy this creature, my husband went out there to see if he could help. He had no food in his hand, no way to bribe the dog to come to him. He simply called to the dog on a whim.”

“It walked right up to him, cowering, his tail tucked between his legs yet somehow still managing a hesitant wag. His ribs stuck through his dull black fur, and you could count every vertebrae in his back and tail. His face was shrunken with no hint of the murderous jar muscles for which pits are famous.

“My husband crouched down, and the dog walked right up to him, still hunched over in fear, and laid his head on my husband’s bent knee. At that moment, as he gently stroked the filthy fur, my husband lost his heart.”

“We brought the dog into our home, bathed him, treated him for fleas and fed him carefully, because starvation causes the stomach to reject large amounts of food. He slept in our bedroom that night, even though I protested vehemently.

“I’d never owned a pit bull, had never spent much time with them, and I had a hatred of the breed that was stoked by the many media reports of these “brutal and bloody” beasts. I was scared of him. That night and many nights afterwards, he slept on a cushion on the floor of our bed.”

“We named him Dozer. The plan was to get this dog back to good health, then get him adopted out. God had other plans. A vet check showed that Dozer was a pure-bred pit bull with long legs and unusually stocky facial structure. Fed a high-protein diet, vetted, neutered and given lots of loving attention, Dozer blossomed and his true personality started showing.”

“That starving and abused animal turned into a muscular, glowing, powerful, loving dog whose main purpose in life seems to be to find love and fun. He’s intelligent, and learns tricks with only a few lessons. He plays with our teen children and us with all the energy and abandon of a companion who knows he has found his forever home.”

“He has only one drawback: due to being raised alone in a shed, he never learned to properly socialize with other animals. He does, however, associate well with people and never met a stranger he didn’t like. And when we sit in the living room, he jumps on our lap, a monstrous lap dog that craves the contact. When we lie in bed, he jumps up with us and happily snuggles against the nearest warm body.

“When I sit at my computer, he stands next to me and leans his corded muscles against me, seeking the reassurance of touch. He’s particularly bonded with my teen daughter, and he will regularly go and sleep in her room, a dark protector with a snore like a foghorn and the occasional biological warfare of protein-induced gassiness. He has an expressive face, and those massive jaws of his regularly stretch into an exuberant smile. He is home.”

“I was afraid of pit bulls. I’m not any longer. I’ve seen the beauty, loyalty and love of this particular breed, and I’d rescue another one in a heartbeat. Dozer is our baby, our own furry Moses drawn from the trash heap, and I couldn’t get rid of him if I tried. Pits are truly the best dog breed I’ve ever had the joy of knowing.”

What a wonderful rescue story. Did you rescue your dog? If you’d like to share your rescue story, you can also email your photos and stories directly to us under the Subject “Rescue dogs are family” to team (at) dogheirs (dot) com.