Home Dog Blog ‘Can I keep him?’ cries a surprised baby boy when he receives... 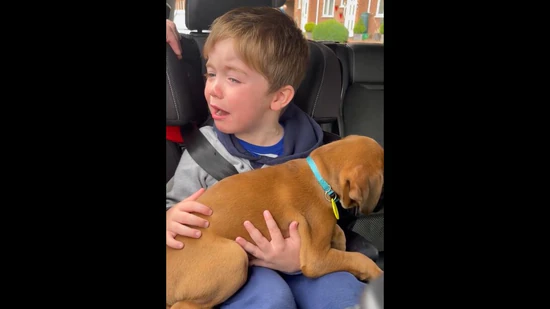 The video depicts a bewildered child who can’t stop crying as he receives his first pet dog.

Do you remember the time you got your first pet? How did you react, overjoyed or moved to tears? This video shared on Reddit shows a little boy who simply cannot stop his tears from trickling down his cheeks as he gets his first puppy.

A boy sits in the rear seat of a car with a cute puppy on his lap in this short video. It’s also clear that this youngster has been crying for quite some time and still can’t manage to control his emotions. This is most likely due to the fact that his greatest wish of having a puppy all to himself has finally come true.

The caption for this lovely dog video states, “Little child crying about obtaining new friend.” He tries to get a few words out through his emotions, such as “can I keep him?” He is reassured, though, that this adorable little puppy is all his – “he is yours.”

This video, which was posted on the r/aww subreddit a little over 17 hours ago, has received over 15,500 upvotes and many reactions from dog lovers all around the world who can’t get enough of this overwhelmed youngster and his new companion.

“I’ve never seen a dog that looked so much like a young Scooby Doo,” a Redditor said, referring to the popular Cartoon Network show. “I believe this was my reaction when I received my Golden in third grade. Another confessed, “Thank God my folks never got a camcorder.” “Many years from now, he’ll be an elderly man and remember getting his childhood dog,” a touching response says.

Little boy crying over getting new friend from aww

How do you feel about this lovely puppy video?