Home Dog Blog A Heartwarming Hero’S Farewell Is Given To A Military Dog Suffering From... 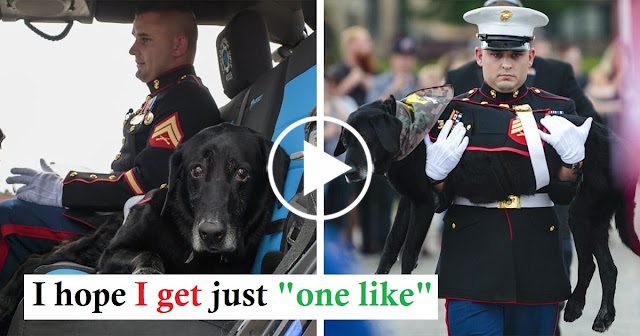 Cena, a bomb-sniffing black lab for the marines until he retired in 2014, receives hero’s send-off organized by his first wartime partner, Jeff DeYoung

Hundreds of people in Michigan came together to salute and say a tear-filled final goodbye to a cancer-stricken dog who served three tours in Afghanistan with the US Marines.

Cena the black lab received a hero’s farewell Wednesday before being euthanized at a museum ship in Muskegon and carried off in a flag-draped coffin.

Cena was a bomb-sniffer for the marines until his retirement in 2014. He then became a service dog for Lance Cpl Jeff DeYoung, Cena’s first wartime partner.

DeYoung organized the celebration for the dog. He said he wanted to take his dog on one last ride in a topless Jeep before Cena was put down. The Jeep was decorated and named “Cancer Response Team”.