Home Dog Rescuted These rescued Pups require a forever home after suffering together and being... 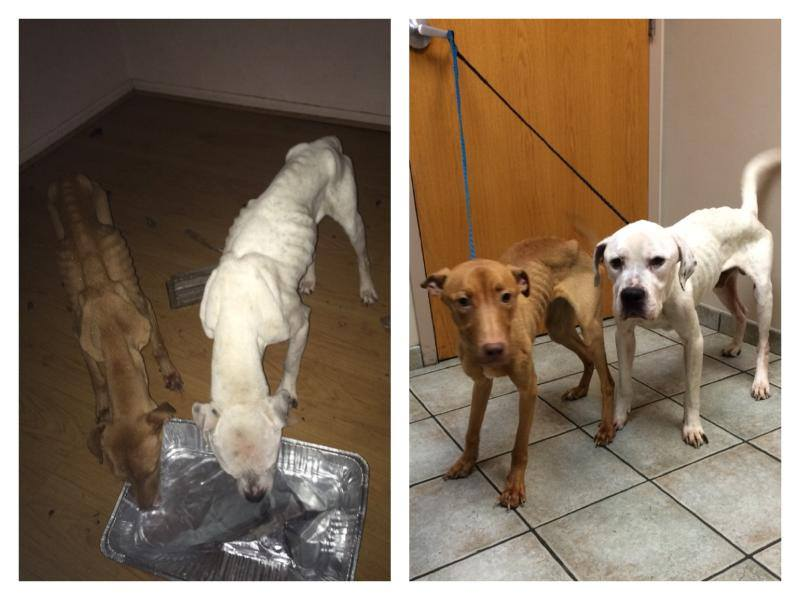 Oscar and Emmy were found by the Chicago Police Department in an abandoned building on March 5. They were near death from starvation.

The Department requested that the Trio Animal Foundation, a non-profit organization that aids shelters, rescues, and individuals by covering medical fees for homeless pets as well as promoting adoption and spay/neuter programs, meet them at the emergency vet where the dogs were transported.

Emmy weighed barely 22.4 pounds and her body was on the verge of starvation. She was anemic, had a high white blood cell count, and was dehydrated to the point of death. Emmy was given IV fluids, pain medication, antibiotics, and a slow eating schedule to begin with. The conservative feeding schedule was established to avoid “refeeding syndrome,” which might have overburdened her famished system and resulted in organ failure or death. Emmy was fed several tiny, high-fat meals throughout the day to assist her system acclimate.

Oscar was in worse shape:

His body has gone into starvation mode, and he is suffering from hypophosphatemia. This means he doesn’t have enough phosphorous in his blood, which reduces the quantity of oxygen flowing to his heart, red blood cells, skeletal muscle cells, and brain cells. His liver enzymes are also elevated, which may indicate that he is on the verge of liver failure. Oscar was immediately started on IV fluids, vitamin B, and other electrolytes.

Three compassionate vet technicians as well as the vet themselves, took on the task of bring these dogs back from the brink. 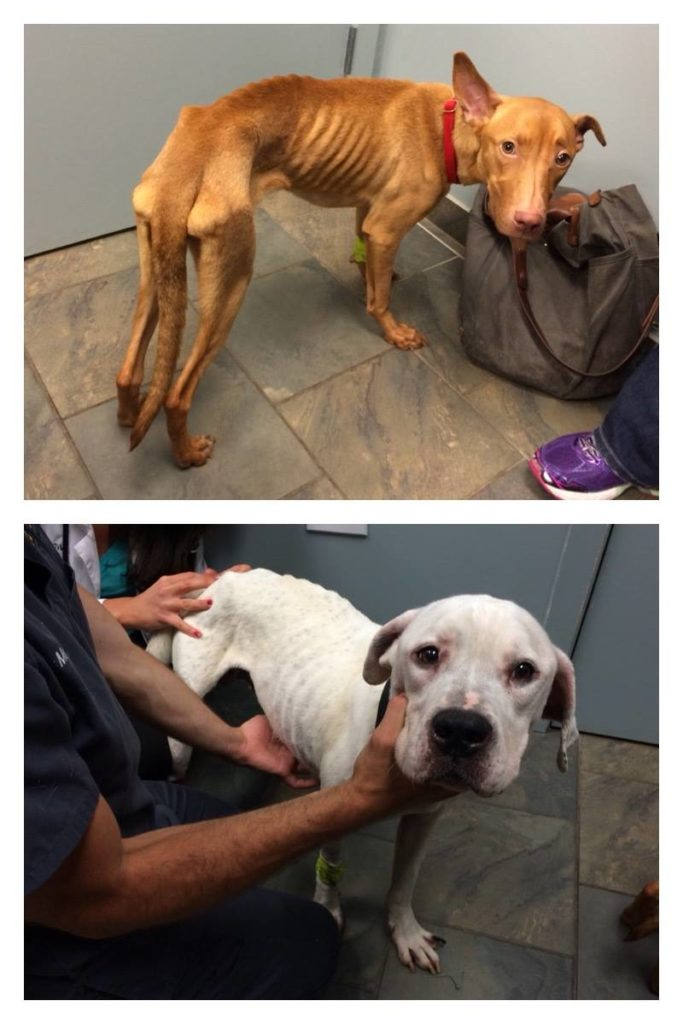 “They were both in the hospital for three weeks,” Nolan explained. “It honestly took them 10 days, especially Oscar, to turn the corner.” I believe it took us 5-6 weeks to realize they had fully recovered physically.”

Emmy fell in love while in the hospital. She had a crush on Anthony, one of the vet techs who was caring for them both.

“Emmy chose Anthony from the beginning,” Nolan explains. “She followed him around and was always wanting to touch him.” He is a very kind and compassionate person, which Emmy obviously picked up on, and he spent a lot of time working with her while she was in the hospital.”

Fortunately for her, the emotion was reciprocated.

“It’s difficult to ignore a dog that demonstrates that type of dedication and affection for you,” Nolan concluded. “Anthony was so heartbroken she was going when I picked them up from the hospital and took them to our partner boarding facility… He carried her out to my car and waited for us to leave. Several times a day, he inquired about her. The following weekend, he persuaded his fiancée to come meet her, and the rest, as they say, is history!”

“All I could think was that she was a lovely dog.” I allowed her to follow me around and spent as much time as I could with her. I also started teaching her basic commands and manners, which she soon picked up on. I could see her devotion to me, and as she grew closer to me, I became closer to her as well. She’d wait for me outside the restroom. Alternatively, she might lie outside the exam rooms where I was. When I arrived at work, she was ecstatic to see me every day! I could tell how much she cared for me and couldn’t let her go because she seemed like such a lovely dog. I do a lot of the same training as the other Trio dogs and have the same affection for them, but Emmy was unique.”

Oscar Is Still Looking For His Life’s Love 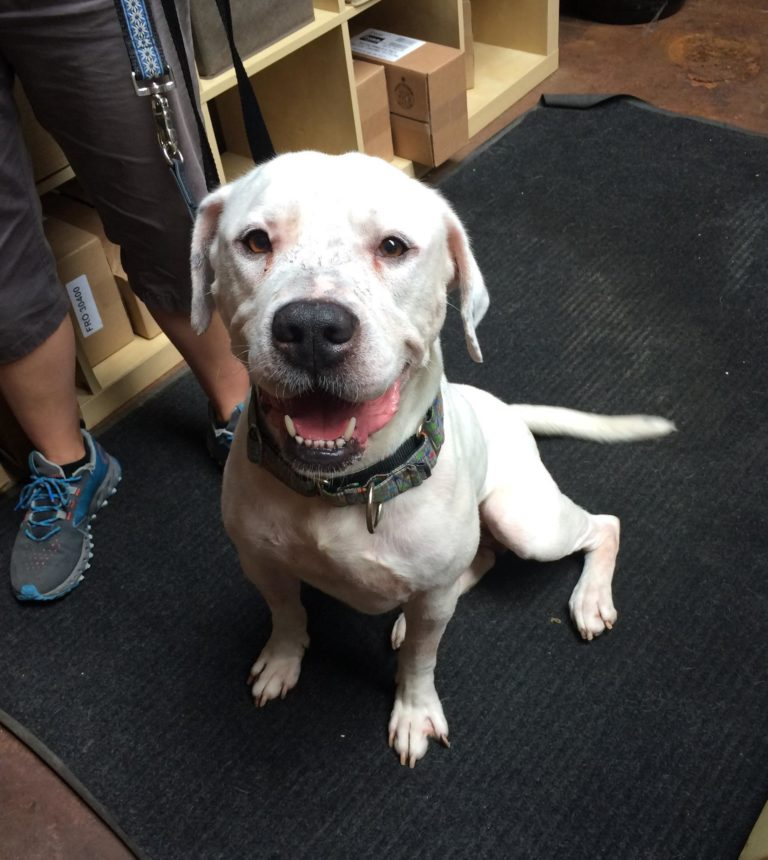 While Emmy has found her happily ever after, Oscar has fully recovered and is eager to find his own love! He’s even taking part in a “board and train” program, in which he lives with a trainer at her home while undergoing training.

Nolan said the perfect home for Oscar would be:

Oscar requires the services of an experienced dog owner. He is a happy-go-lucky dog most of the time, but he does have some fear issues from his past. Oscar need a home where someone will keep up with his training, be consistent, and confident in showing him the ropes. He might be an only dog or a playmate for your existing pup….he will go with the flow. Oscar sleeps well in his crate, walks well on leash, rides well in the car, understands all of his basic commands, and LOVES to play. He is a slacker, as are most Bulldogs, and sleeps a lot. 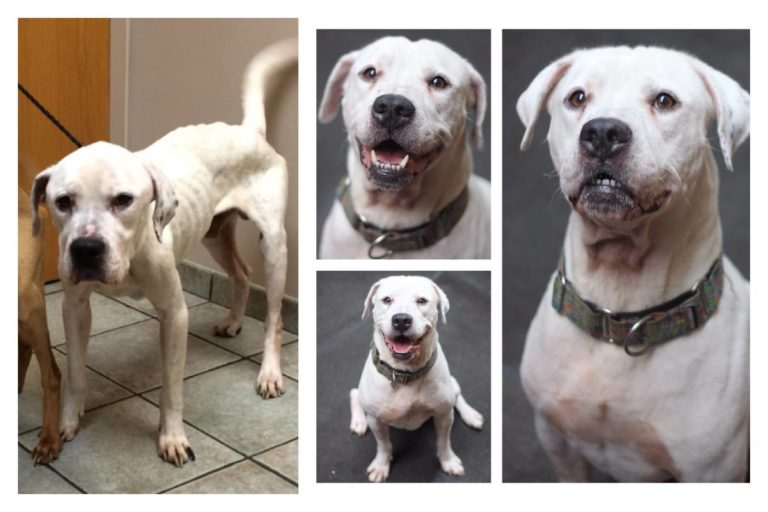