This incredibly rare prehistoric shark made headlines not long ago, when researchers came across a specimen near the Portuguese coast. No one knows why this species has managed to survive for so long, but one thing’s for sure: the frilled shark does indeed look like it got stuck here from a different age. According to the IUCN Red List of Threatened Species, the frilled shark (Chlamydoselachus anguineus) is categorized as “Least Concern”, meaning that the species was evaluated at a lower risk of extinction. However, we don’t exactly know how many of them are left in the oceans. Since they are so rarely seen, it’s impossible to estimate their population status. In fact, scientists had not seen the shark in its natural habitat until 2004, despite it was discovered in the second half of the 19th century.

The frilled shark lives between 390 and 4,200 feet below the surface and, as with other deep-dwelling animals, this makes it much more difficult to encounter. Although they can be found in many different areas around the globe, their distribution seems to be “spotty”. Some of the areas where you may be able to see the frilled shark (if you can swim that deep) include the Suruga Bay in Japan, near the coasts of New Zealand and Australia, or in the Atlantic Ocean between Norway and Namibia.

The frilled shark is quite unusual compared to other sharks; it has more primitive traits and appearance (hence the name living fossil), with a long, slender body and a snake-like head. It isn’t a particularly good swimmer, and its bite force isn’t that strong either, but perhaps what distinguishes it most from all other shark species is its teeth. Its jaw is lined with hundreds and hundreds of backward-facing trident-shaped teeth, each forked into three nasty prongs. This setup helps the animal grasp and devour its prey in sudden lunges.

David A. Ebert, director of the Pacific Shark Research Center, had a literal firsthand experience with the nightmarish jaw of a frilled shark. – “I can tell you from snagging my fingers on the teeth, you can only back out one way and that’s in toward the mouth and then out. It didn’t feel good, I can tell you that.” And those teeth aren’t only good for snagging prey, but also luring it. In contrast to the shark’s dark brown or grayish skin, “the bright teeth might serve as almost a lure to bring in prey items that see this light color,” he said. “And by the time they realize, Oh, that’s the teeth of a shark, they’re too close and the shark is able to ambush them at that point.”

“It’s almost like when you drive out of a parking lot exit and they have the spikes sticking out that say, ‘Do not back up,’” he added. “That’s kind of what happens when these things catch prey items.”

The sharks’ diet mostly consists of squids, bony fish, and occasionally, other sharks. Thanks to their very long jaws, they are able to eat prey that is larger than their own size.

On average, they measure between 3-5 feet, but their bodies can reach up to 6.4 feet long, with females being slightly longer. Scientists still have to learn a lot about the species, and so their lifespan is unknown, but they estimate that they can live up to 25 years. 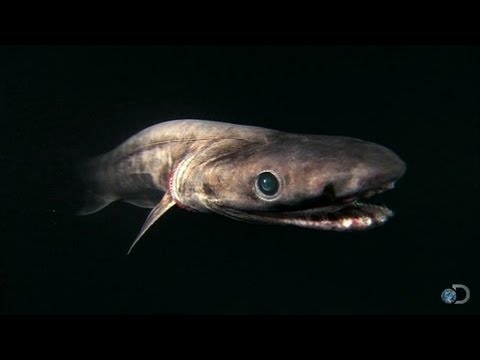 In 2007, a frilled shark, captured by a Japanese fisherman at the surface of the water, was put on display in a marine park in Japan. Unfortunately, it died after only a couple of hours of captivity, which shows how fragile the creature is when it’s far from its natural habitat.

Interestingly, these animals hold the world record for the longest gestation period in the animal kingdom, with the length of 42 months. In comparison, the elephant, as a silver medalist, has a gestation period of only 18-22 months. The baby sharks develop inside the female, and they are only born once they are equipped to survive on their own. Through this method, the highly developed younglings have a better chance of surviving after being born. Even though the shark is not at risk, according to the IUCN, over-fishing leads to a decrease in the available food for these sharks, and in most cases, they get tangled up in fishing webs, which can be a threat to the species. Especially because frilled shark babies take so long to develop, accidental bycatching of the female sharks can put a strain on their numbers.