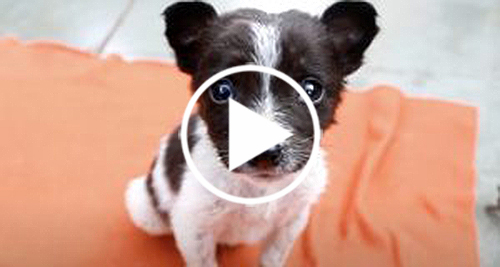 A soaking wet puppy lay motionless on the ground next to his siblings. Adoo was unconscious and hypothermic so rescuers had to race to save him. If they warmed him up too quickly he would die from the cold.

“We took him to our hospital and put him in a nest of hot water bottles, blankets, and human arms,” Animal Aid Unlimited says. “But all we could do was wait to see how his tiny body would react to the warmth from the outside.” “Mere blankets would not have sufficed.”
The rescuers describe Aboo as “a new little man by the next morning — his eyes were shining and he even ate on his own.” “As a precaution, we kept him with us for a couple of days before returning him to his mother.”