Home Dog Blog Pregnant Stray Dog Sheds Some Tears After Couple Feeds Her On The... 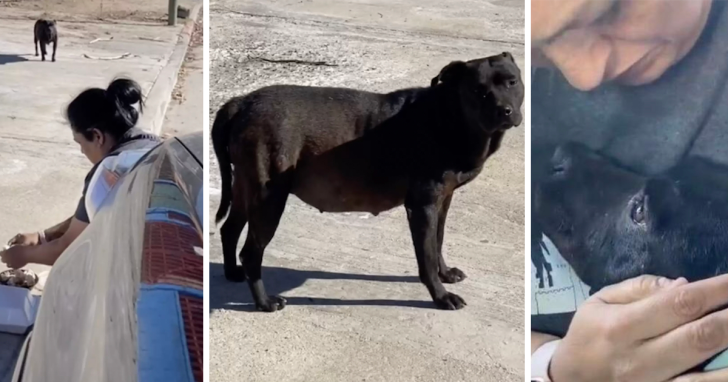 A couple was eating at a food stand when they noticed this stray black pittie staring at them. She didn’t beg or approach them, but the owner shooed the dog away. On the way home, they saw the dog on the side of the road and decided to stop. “When we left, we saw her standing on the sidewalk a few blocks away. She was definitely skittish, but based on the scars on her face & body it’s understandable. It’s also when we realized she was pregnant.”

They finally convinced Poppy to eat from their hands, and then it was into the car to go get some veterinary care. But this is where the dog cuddled up with Jacks Anderson and cried real tears just thankful she was finally safe. “I don’t think I’ve ever seen that in a dog, and it definitely made an impact,” she told The Dodo.

And then Part 2… Poppy goes home!

After treatment for a few minor issues, Poppy was released back to them. The plan was originally to foster the dog, but she’d become such a big part of the family in such a short time. The pittie is the sweetest girl, and they know she’ll make the best mama when that day comes!