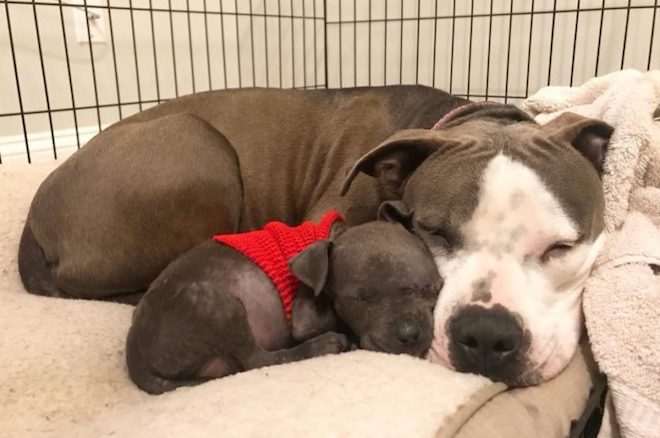 Animal Control found Daya a pit bull wandering the streets of York, South Carolina in the middle of winter and they picked her up.

The dog was noticeably pregnant so animal control reached out for help for Halfway There Rescue, who agreed to adopt Daya so she could give birth at home rather than in a shelter.

Tragically, this did not happen, the mother dog lost her babies and she needed emergency surgery due to infections.

Daya’s foster family noticed she was grieving after losing the babies, it it was clear that she is emotionally hurt and depressed.

Halfway There Rescue Then in our story we also have Raisin , a dog without a parent was found wandering the road with an injured eye and very ill.

She was rescued by Halfway There Rescue. Puppy was too young to live without a mother.

Rescuers came up with a solution to reunite his two, and when they did, something special happened!

The grieving mother immediately connected with the little puppy and took Raisin to raise her as her own.

The little puppy was also happy because it was the first time she felt loved and protected, so they started healing each other!

When baby Raisin was grown up and passed the weaning stage, Daya was ready to start her new life with a new family.

In fact, Daya went to live with the first foster family who then decided to adopt her forever.

Raising also ended up permanently with her foster family, she has another dog sibling named Charlie, they get along great.

This is such a cute story that tells us that we can be healed from love and care!