Home Dog Blog Neglected Puppy Surrounded By Vultures Waiting For Her To D.i.e Is Saved

It can be said that animals are a very intuitive type of being. They can sense our fear, our happiness, our sadness. This seems to be particularly true for dogs.

Other animals even of different species are attuned to each other. They have basic instincts that we as humans let our consciousness get in the way of.

We may think our dog isn’t feeling well, but their dog counterparts, or who’s to say even cats or birds seem to know this to a greater extent. 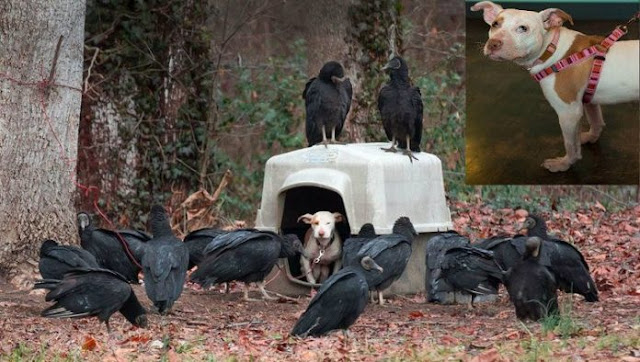 They tune in to body language and you feel they can almost smell our physical illness and how deep it goes.

When we are sick they are by our sides lovingly willing us to get better. This makes it all the more appalling when humans look at a suffering animal and feel nothing.

Or when they ignore the responsibility to care for something that is depending on them to survive.

Such was a very dark tale for one young pit bull puppy named Lilo. She had made lots of friends out in her yard where she had been banished to stay. But these weren’t the type of friends you want to have. 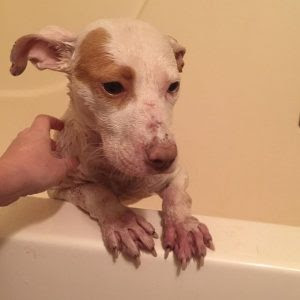 They were vultures and they were using their animal instincts to be with this puppy for all the worst reasons.

Continue reading on the next page to see what happened to this tiny puppy and why the vultures were so intent on being her friend!

On Christmas day of 2014 it was a horrific scene for little 8 month old Lilo. She was left in the yard, chained to a tree with nothing but a small crate to live in and keep warm.

But it wasn’t just that, Lilo was surrounded by vultures. This went on for 5 days and no one helped her or cared.

They were waiting for the right moment to eat her, a thought that will break any dog lover’s heart. 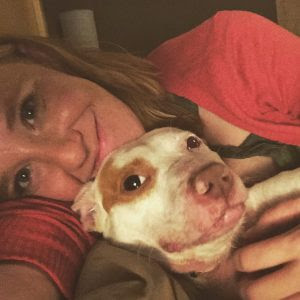 But someone was watching out for Lilo and on the 5th day she was rescued by the Merit Pit Bull Foundation.

They took her away and finally found the home she deserved with Keana Lynch and boyfriend Travis Henley.

She was malnutritioned, underweight and had some skin infections but with the right love and care has become a healthy happy puppy. 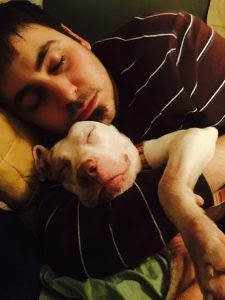 She was home and with people who would treat her as any beautiful, loving dog should be treated. Even without having had any human kindness for the first 8 months of her life, Lilo quickly became a big time snuggler.

Her new family also said she had no idea what to do in the house or even what her toys actually were. But she’s a very smart pup and was soon playing with her toys like any puppy would. 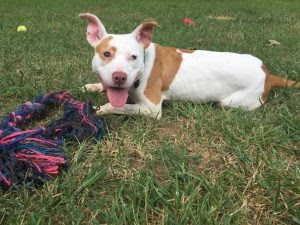 Today the only clue to her past life is that she hates being alone. Luckily she now has a canine sister to keep her company when her parents are away.

She also has become an ambassador for the Merit Pit Bull Foundation, working with dozens of children to spread the word on being a responsible pet owner and the happy endings that come from a rescue puppy.

A happy ending for a very happy pup!!