Home Dog Rescuted Man Finds Two Frozen Puppies in Box and Rushes to Save Their... 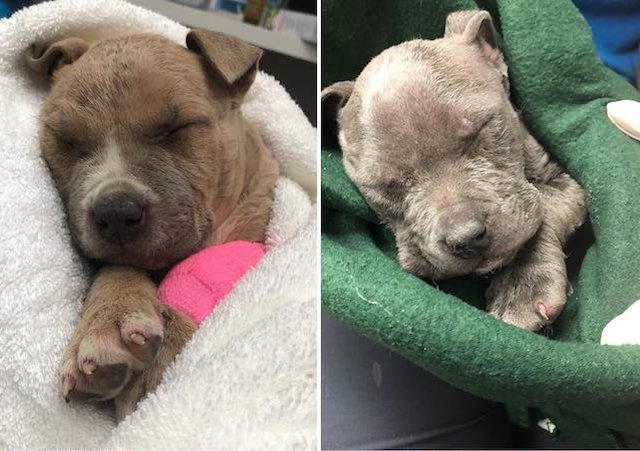 He saw the box lying in an abandoned lot. Then he looked inside… Two abandoned puppies would have frozen to death if the box they were in hadn’t been spotted by a man walking by an empty lot.

He saw the box lying on the ground and decided to investigate – the two puppies were freezing and unconscious inside.

He raced the two frozen puppies to KC Pet Project’s animal shelter, not knowing if they could be saved.

“Today, we are thankful for a number of reasons. We’re thankful for the man who found the box in this picture in an abandoned lot that contained two puppies and brought them to the shelter for care,” KC Pet Project writes on their Facebook page. “They were unconscious when they arrived and were immediately taken to our veterinary clinic.” 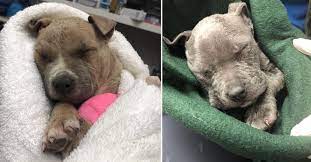 “Freezing and severely dehydrated, we’re thankful for our veterinary team who worked for hours giving these puppies fluids and working to warm their little bodies up to get to normal levels,” they continue. “We’re thankful to the canine care team member who took them home for overnight observation and continued with their care.”

Although they were very concerned the puppies wouldn’t pull through, their team effort paid off.

“We’re so happy to report that they survived and this morning they have eaten and are resting. We’re also thankful to all of the donations to our Roadrunner Medical Fund that allows us to provide care to puppies like this at KC Pet Project.” “They will now be monitored for a few days to ensure they are stable then will move to a foster home for recovery until they are ready for adoption.”

And they sure are eating. Just before they moved into their foster home, the two pups got to eat some yummy gruel and KC Pet shared a video of the occasion.

“It’s safe to say that they enjoyed it,” says KC Pet Project. “So much, they were wearing it.”

The rescue will no doubt have many people interested in adopting the 3-week-old puppies, but they won’t be adopted out until they are 8 weeks old. We’re pretty sure they’ll find loving homes in no time.