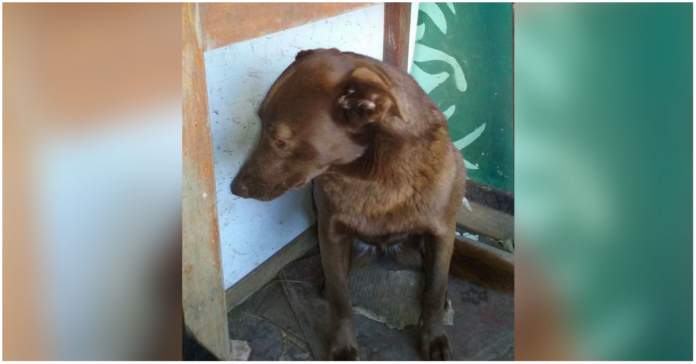 Pakita was found wandering the streets was passed over by adopters time and time again for a younger dog.

Pakita was found wandering the streets when she was eventually brought to Argentina’s El Arca Animal Partido de Mar Chiquita. Volunteers instantly fell in love with her. Especially one volunteer named Silvia Ferreyra. But sadly, in spite of her warm demeanor, she was passed over by adopters time and time again for a younger dog.

Her reality looked bleak. She sat in her kennel day after day. Pakita became depressed, withdrawn, and in many ways, broken. She lost a lot of weight, unwilling to eat much. The volunteers at El Arca were very concerned.

For two long years, the volunteers did everything they could to find Pakita a home but nothing worked out. They finally decided to use social media to their advantage– to Pakita’s advantage– and post a photo of her and her bio on Facebook. But the whole ordeal was no easy task. Pakita would shake and cower in the corner, unwilling to pose for a picture. FINALLY, they were able to get a decent shot. In fact, it even appeared like Pakita was smiling!

Then a miracle happened!

“Immediately, we get a message from a woman saying that the dog was her son’s and that he had been looking for her!” Ferreyra told The Dodo.

Ariel Naveira never thought he’d see his dog again. After all this time, Ariel had to accept that Pakita was never coming home. But then his mother called him after seeing the Facebook post. He couldn’t believe it was her. But he went to the shelter the next day just in case.

The volunteers brought Pakita out to see Ariel, and he knew right away it was her but Pakita wasn’t so sure. You can see in the video, she looks hesitant, uneasy but as she sniffs around and around, she realizes…

Pakita falls to the floor with excitement, tail wagging, waiting for proper belly rubs from her favorite person in the world. It may have been two years but she knew that smell, that face, that touch. All that waiting and he finally came for her! It’s a dream come true!

Pakita and Ariel’s reunion is sure to pull at your heartstrings. Enjoy the video below and don’t forget to hug your fur-baby extra tight tonight!