Home Dog Blog Couple Reunites With Lost Dog After She Was Ejected From Car Window... 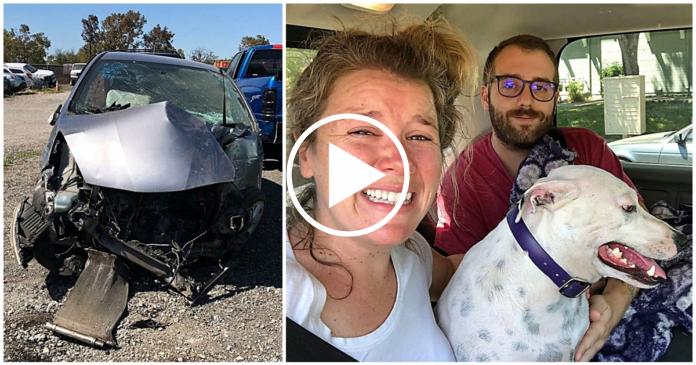 “I lost it. I fell to my knees in the middle of the cul-de-sac, waiting for her. It took her a couple of seconds to register who I was, but once she did, she just comes running to me.”

Stefanie and Duane Lindsay spent a fun-filled day at the beach with their three-year-old dog, Roo. But the day took a turn for the worst after they ended up in a bad car accident on their way home.

While the couple was driving back to their El Dorado County, California home from Bodega Bay, another driver crashed into them while going 65 mph on the highway.

The couple’s car flipped and landed upright in a nearby grassy field, but thankfully they only suffered minor injuries. They immediately checked on each other before realizing that Roo was no long in the back seat.

They saw that the back window had been blown out, and began to think the worst. After forcefully being thrown out of the window, Stefanie was sure Roo was dead.

Despite bleeding from his head, Duane began crawling around on the floor to look for Roo while Stefanie called 911. While she waited for an ambulance to arrive, she searched the road and nearby grass for Roo, but to no avail.

Once emergency personnel arrived, Duane was transported to the hospital, while firefighters and highway patrol used thermal sensors to scan the area for Roo.

Duane was diagnosed with a fractured sternum, but since Stefanie was unable to be with her husband due to Covid-19, she returned to the area to search for her beloved pup.

Although she still couldn’t find her, she refused to give up. She turned to social media and posted about Roo, trying to garner the attention of as many rescue groups in the area as possible.

At this point, even strangers in the community joined in on the search for Roo.

14 hours after Roo had gone missing, the couple saw a tip that someone posted on Facebook. It led them to a neighborhood three miles away from the accident, where Roo was contently sitting under a tree.

“I lost it,” Stefanie told CNN. “I fell to my knees in the middle of the cul-de-sac, waiting for her. It took her a couple of seconds to register who I was, but once she did, she just comes running to me.”

Thankfully, aside from road rash and soft tissue damage, Roo was going to be okay.

Stefanie hopes their story will encourage people to buy their pets a safety harness seatbelt.