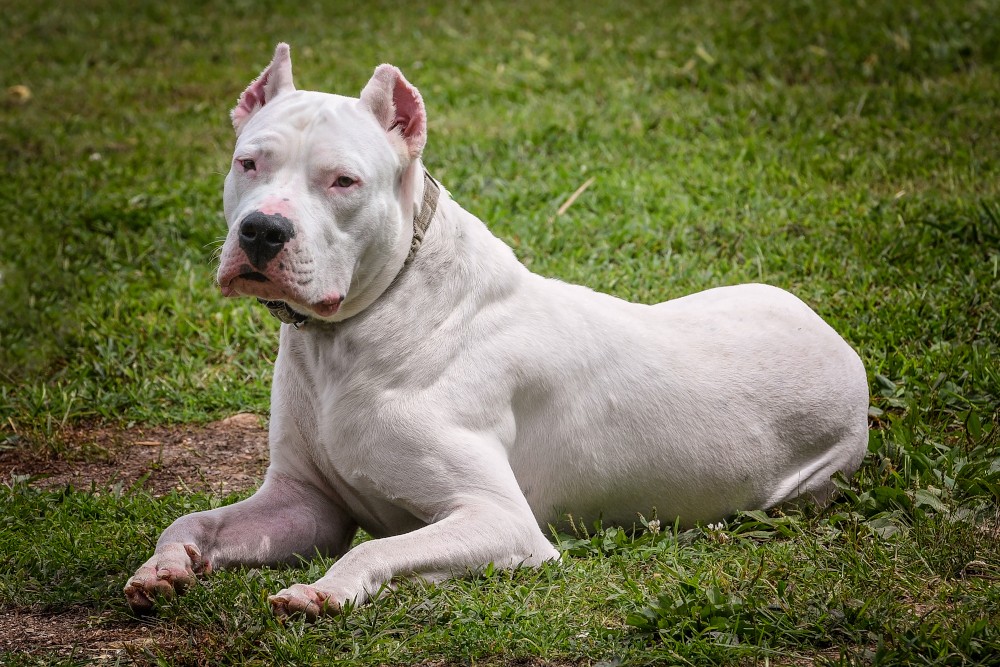 The Argentine Dog is a large dog that has a rich history and even richer roots. The breed as we know it today resulted from the mixing of many different breeds of dogs. Why did the breeders of these dogs strive to obtain the breed standard known to us today?

Argentine dog – the history of the breed

The Argentine Dog is a breed of dogs assigned according to the FCI to Group II (Pinscher and Schnauzer, Molossian, Swiss Mountain Dog), Section 2 (Molossian). The breed standard is number 292. Its direct ancestor is the Córdoba (Argentina) fighting dog, which was created by crossing:

All these dogs were brought to Argentina by the Spaniards during the conquest of South America. At the beginning of the 20th century, during planned breeding, the Cordoba fighting dog was crossed with breeds such as:

The Argentinean Dog found its way to Europe in the second half of the 20th century, the official standard for (sz) was expected in 1973. As a dog from Spanish kennel, it has an original name in that language. It reads “dogo argentino”. Sometimes we can also find the name Argentine mastiff.

The purpose of the Argentinean Great Dane breed is nowadays limited to companionship and guarding. In the beginning, they were used to fight large predators. Their opponents were often big cats. Can you imagine such a duel? Argentine dog vs puma – it would have to be a spectacular fight. Fortunately, there is no longer any need to roll these too often.

The Argentine Dog is a tall dog with a strong and harmonious body. According to the pattern, adult males reach a height of 62-68 cm, females 60-65 cm. The weight of an adult Argentine Great Dane should be in the range of 45-65 kg. The exact weight of your dog depends on sex, diet, health, and level of physical activity.

The Argentine Dog’s silhouette resembles a rectangle, and its muscles are clearly visible. The clearly muscled neck supports a massive head with a square outline. The eyes and nose of an Argentine dog are always black, and the triangular ears must be thick and rounded at the tips. They can be trimmed. The limbs and tail of dogs of this breed are thick and proportionately long to the rest of the body.

The color of the Great Dane is only white. There may be a slight black mark on the ears and around one eye only. We are talking then about a “pirate” coat. The white coat of the Argentine Great Dane helped to distinguish him from the animal he was fighting. The coat of dogs of this breed may have an undercoat, but it may not. It depends on the climate in which the dog lives.

There are no such dogs as the Argentine Black Dog and the Argentine Gray Dog. As already mentioned, the only recognized color of the coat of dogs of this breed is white. So where does the wrong nomenclature come from? Quite simply, the Argentinean Great Dane is strikingly similar to the Cane Corso Italiano, which can be either black or gray in color.

The Argentine Dog is a guard dog with a very strong territorial instinct. He does not trust strangers, but is not aggressive towards them by nature. Additionally, they are child-friendly dogs, they become attached to their family and are loyal to their handler. The other side of the Argentinean Great Dane’s character is great self-confidence and a subconscious desire to dominate, especially towards other dogs.

The nature of the Argentinean Great Dane means that not everyone can become its guardian. Where does the restriction come from? Well, as a dog with an amazing fighting spirit, guardian instinct and the need to dominate, it may turn out to be too stubborn for inconsistent people. The Argentine dog needs a firm approach on the part of humans and a sense of security.

As a hybrid of many breeds of dogs, the Argentine dog is a breed whose representatives may differ from each other in terms of their innate character. This distinguishes her from other breeds, which usually have a specific behavior, corrected by experiences, mainly from the period of puppyhood. It is worth mentioning here that some puppies are born deaf, which is due to the addition of bull terrier blood. This confirms that different genes in the litter can take over and are also responsible for innate behavior.

The Argentine dog is on the Polish list of dangerous dogs, but we cannot consider him an aggressor in advance. The decisive factor is how the dog was raised and how we behave towards it. Especially if we are someone new to him, whom he does not know yet.

The price of an Argentine Great Dane in trustworthy kennels is up to PLN 6,000. Is it a high price? An unequivocal answer to this question is difficult, but we can focus on what is included in the price. Normally, it must be a document confirming the dog’s racial origin. It can be a pedigree or a certificate on the basis of which you can apply for a pedigree.

The price includes a set of tests for canine parents, which must be performed before mating and tests of puppies immediately after their birth. The cost of purchasing a dog also includes initial socialization conducted by a specialist in breeding and subsequent support provided to the owners after purchasing the dog. In some cases, you can get a layette that will make it easier for you to take your dog home.

The price of the Argentine Great Dane is additionally inflated by the fact that the breed is rather difficult to find in Poland, and the selection of the best specimens is hampered by the genetic diversity of dogs. Nevertheless, we recommend that all amateurs of this breed look for a reliable kennel and cover all costs related to the purchase of a purebred dog.

In addition to the cost of buying a puppy, we must take into account the expenses incurred throughout the dog’s life. First of all, these are the costs of food, accessories, and medical care. For demanding dogs with a difficult temperament, the help of a behaviorist may be necessary. Especially for caregivers who have decided to adopt the Argentinean Great Dane without having the necessary experience.

Upbringing and training of an aggressive breed dog

Aggressive breeds in Poland are breeds that require a proper permit. However, it must be remembered that this does not mean that the dogs qualified there are only ruthless murderers, thinking only of shedding blood. Quite simply, they are much more difficult to educate and can become dangerous as a result of improper treatment.

The Argentine Dog is one such aggressive breed. Due to their history, these dogs, if they fight, do so until they die. That is why it is so important for the dog to be able to stay calm even if there is a stimulus in the environment that provokes aggressive behavior. Only the handler who controls the dog’s bravery will be able to enjoy the nice side of his character.

The Argentinean Great Dane dogs are intelligent animals that can be taught to behave properly as well as to engage in dog sports. However, they do need a confident caregiver who will treat their dog fairly and consistently. The Argentinean Great Dane is a sensitive dog that will appreciate the heart shown to him, but will also remember any harm he has suffered. For this reason, it is so important that every puppy is properly socialized.

Which Dog Breed Lives the Longest?

All about Tibetan mastiff