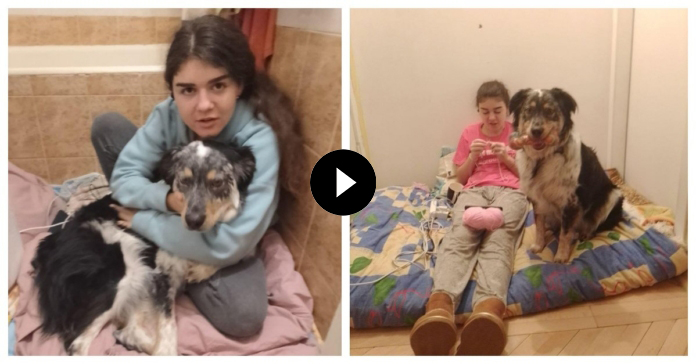 He’s serving a greater purpose than I could have ever imagined,” Scooter’s former owner said.

When Russian troops advanced on Ukraine’s capital city, a Department of Justice contractor based in Kyiv was given 12 hours to pack a suitcase for him and his daughter and leave.

“Nobody really thought Russia would take [Ukraine] all the way to Kyiv,” Mike Hall told FOX 17 News/WZTV. “The US government and their intel said that most people didn’t think Putin would try to do it.”

But within only a week, Putin’s War–which has claimed civilian lives and already caused 1 million people to flee—-has had many tragic repercussions, including countless families separated from loved ones in the conflict.

Sadly, Hall and his daughter know this heartbreak first-hand. In the rush to evacuate, the Tennessee man was also told he’d have to leave his two dogs behind, forcing him to find new homes for loyal pups who’d accompanied him all the way to Kyiv from Tennessee.

Thankfully, Hall found homes for both dogs before he was flown out of the war-torn country. One dog was adopted by his daughter’s boyfriend, a medical student living overseas. The second dog, Scooter, went to live with a Ukrainian family fleeing Kyiv for the relative safety of Western Ukraine.

“One of my employees hooked me up with a Ukrainian family to take the other dog,” Hall told the station.

Now the Tennessee man is safely out of Ukraine, but he still desperately misses the dogs he was forced to leave behind in Ukraine. “Some people say it’s just a dog, but dogs are family to most people,” Hall told Fox17 News. “That’s your family.”

Even so, Hall takes pride in knowing Scooter has become a source of comfort and strength for his Ukrainian family. Hall learned this after Scooter’s new owner sent him a note describing how the dog had begun acting as an emotional support animal for her young daughter.

“Your dog is an angel because my daughter stopped crying and she’s not afraid because she has him to sleep with at night,” the note reportedly read.

This led Hall to realize that–although he loved and missed his fur family–Scooter was exactly where he was supposed to be; providing comfort and love to a young Ukrainian girl in need.

“He’s serving a greater purpose than I could have ever imagined,” Hall said.

Please make a donation to help us rush emergency aid to other people and animals in Ukraine.